Type I interferon in dermatomyositis: Impact on myogenesis and possible autocrine/paracrine effect

Prominent type 1 interferon (IFN1) signature pathway activation has been recognized as a distinctive feature in dermatomyositis (DM). Nevertheless, the precise mechanism of IFN1 on DM affected tissue has yet to be identified. In some patients, disease chronicity and sustained muscle injury evidently observed clinically and pathologically even with immunosuppressive treatment. DM muscle biopsy shows a dynamic process of regeneration as it contains both muscle fiber damage and regeneration. Because muscle stem cells (MuSC) are responsible for muscle regeneration, Gallay and colleagues aimed to investigate roles of IFN1 on the MuSCs in DM.

Eight MuSCs from immunosuppressive drug-naïve adult DM (DM-MuSCs) with available clinical data, histological samples, and frozen samples were selected from MYOLON database which identified idiopathic inflammatory myopathy based on the EULAR/ACR 2017 or the 239th ENMC criteria 2018. The healthy controls (HC-MuSCs, n = 5) were age- and sex-paired. Three juvenile DM (jDM) and their age-matched control (n=3) were included in some experiments.

The authors classified adult DM into mild DM (mDM, n= 3) and severe DM (sDM, n=5) according to histologic severity score. Muscle biopsies were also evaluated for the number of quiescent and activated MuSCs (Pax7pos) and IFN1 pathway signature by sarcoplasmic myxovirus resistance protein A expression (MxA, IFN1 inducible protein). The number of Pax7pos cells in perifascicular areas of DM muscle biopsy was increased by 206% while the number of Pax7pos cells in the intrafascicular areas of DM and HC was not distinctively different. Similar results were observed in jDM muscle biopsy. Sarcoplasmic MxA expression was observed only in sDM muscle biopsy especially in perifascicular areas.

The authors purified MuSCs for CD56pos myogenic cell cultures to investigate myogenic capacity: proliferation, differentiation, and fusion. After seeding MuSC in complete medium, proliferation assay (EdU incorporation in the growing cell) was evaluated on day 3 at the end of expansion phase. The proliferation index (Eduposnuclei/total nuclei) of sDM-MuSCs, mDM-MuSCs, and jDM-MuSCs was decreased (-43%, -31%, and -54%, respectively). After the expansion phase on day 3, the MuSCs were transferred from complete medium to grow in differentiation medium for another 3 days. At day 6, myogenic differentiation index using immunolabelling for myogenin (myogeninpos nuclei/total nuclei) and fusion index using immunolabelling for desmin (number of nuclei in desminpos myotube/total nuclei) were calculated. The differentiation index of sDM-MuSCs (-68%) was lower than HC-MuSCs but the index of mDM-MuSCs was not distinctively different from the controls. The fusion index of both sDM-MuSCs (-71%) and mDM-MuSCs (-36%) were lower than controls. The results suggested that low DM-MuSCs proliferation impacted the whole myogenic properties.

DM-MuSCs showed increased senescence; the large senescent cells with high SA-b-gal activity were increased in sDM-, mDM-, and jDM (27.5%, 24.6%, and 35.1%, respectively). There was no significant change of the DM-MuSCs distribution in different phases of cell cycle in this study. In the other studies, MuSCs senescence was associated with proliferative and myogenesis defects and increased and sustained inflammation. Thus, the augmented senescence might also explain proliferative defect in DM-MuSCs. Moreover, distinct Pax7pos cells in perifascicular area of DM muscle biopsy were likely activated MuSCs that could not enter myogenesis because of proliferation defect. The authors then further proved the IFN1 activation and investigated IFN1 role in DM-MuSCs proliferation defect.

In conclusion, the in vitro study by Gallay et al. demonstrated the impact of IFN-b on MuScs proliferative properties and its toxic effect at higher concentration and the association between IFN1 and DM-MuSCs proliferation defect which led to myogenesis impair. The IFN1 effect on DM-MuSCs was able to be reversed by specific IFN1 inhibitor and non-specific JAK/STAT inhibitor. Interestingly, the proliferation defect in HC-MuSCs treated with supernatant DM-MuSCs culture suggested the autocrine/paracrine mechanism in DM pathogenesis that might explain sustained muscle injury in DM patients. Because the supernatant effect on HC-MuSCs in this study was counteracted by non-specific JAK/STAT inhibitor, whether the autocrine/paracrine mechanism was mediated by IFN1 or other molecule(s) is debatable and needs further investigation. Further study in a larger cohort would also help clarify the alterations of cell cycle in DM-MuSCs senescence and clinical relevance of IFN1-mediated proliferation defect and autocrine/paracrine mediated mechanism.

About the First Author 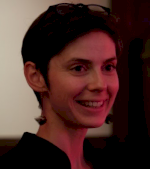 Laure Gallay is an MD, PhD working in clinical immunology at Hospices Civils de Lyon, France, and at Institut NeuroMyoGen, France. Her main interests are neuro-muscular disorders, and more specifically acquired myopathies. She aims to work at public hospital and develop translationnal research in this specific area. Dr.Gallay is currently in postdoctoral fellowship at university of Geneva, working on muscle stem cells.