Duchenne Muscular dystrophy is characterized by progressive weakness of the skeletal and cardiac muscles resulting in an premature loss of ambulation and a premature death mainly due to cardio-respiratory failures. Currently, no cure is available and despite promising advancement for a subset of patients in recent years based on gene therapy technologies, the disease can only be mitigated using corticosteroids with a broad spectrum of side effects, some of which are irreversible.

Combing the literature for drugs highly efficient anti-inflammatory drugs, like corticosteroids, they identified Resolvin-D2. This drug showed similar anti-inflammatory properties as corticosteroids when tested in vitro and in vivo for DMD models but with one significant advantage, it stimulates the activity of muscle stem cells (the cells responsible for muscle regeneration) which are known to be affected in DMD and further dampened by a prolonged corticosteroid usage. 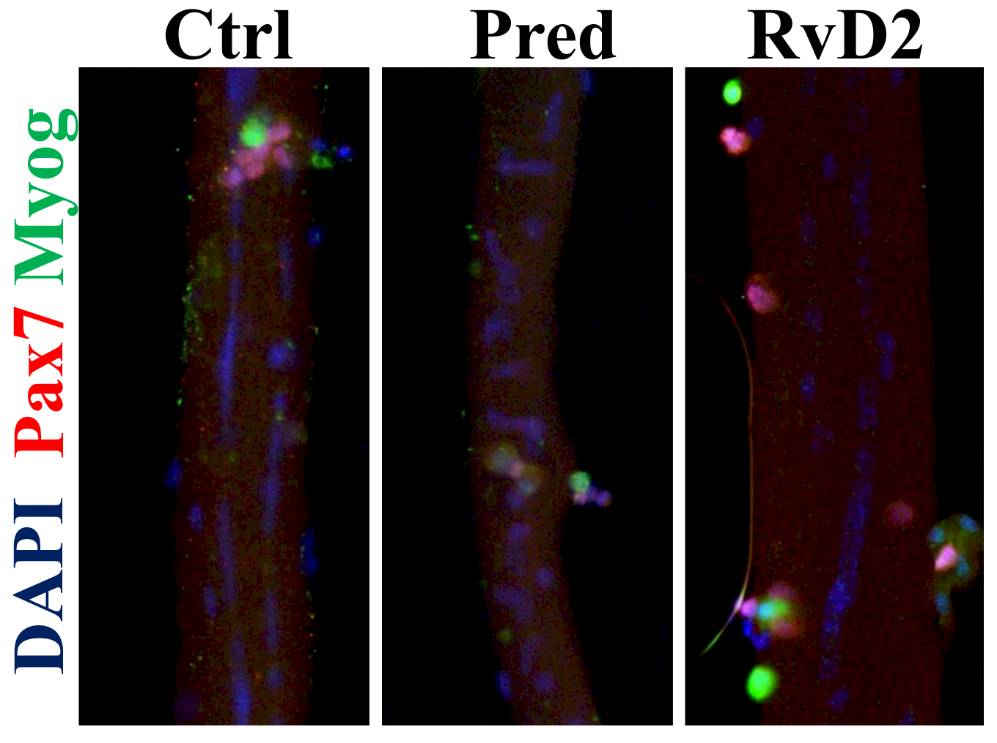 More specifically, Resolving-D2 showed an amelioration of the phenotype of the mild mdx and severe mdx-utrn dKO mice models of DMD by promoting a switch from pro-inflammatory M1 macrophages to anti-inflammatory macrophages type 2. This drug was equally able to directly target the satellite cells to promote their myogenesis capacity through Gpr18-Akt-mTOR pathway.

One of the limitations of the paper is the short-term usage of resolvin-d2. It will be interesting to analyze its undesirable effects for an extensive period in order to ensure the absence or reduction of some of the most reported side effects (weight gain, hormonal perturbance etc) in comparison to glucocorticoids as most of these side effects appear after prolonged use.

However, these results, if confirmed in clinical trials, could represent a new hope in the treatment of DMD. However, a few limitations to the current pharmacokinetic of the drug are still to be bypassed (providing a more convenient formulation to allow an easier distribution and increasing the half-life).

After my bachelor’s degree in Food Sciences (Haiti), I was awarded several international scholarships to pursue a master’s degree at Catholic University of Louvain, in Belgium, and a Ph.D. at University Laval, in Canada. I am currently a postdoctoral fellow at the CHU Sainte-Justine Research Center (the largest mother-child hospital in Canada) in Dr Nicolas Dumont’s lab, where I am investigating therapeutic compounds that target inflammation and muscle stem cell dysfunction with the goal of treating muscle injuries and muscular dystrophies. My research is supported by prestigious fellowships from the Muscular Dystrophy Association and AFM-Telethon.

I received a Ph.D. in Human Genetics from Aix Marseille University in 2013 and joined the laboratory of Dr M. Carrie Miceli at UCLA, first as a postdoc and now as an assistant project scientist. My research areas use genomics, cell biology and molecular biology. My first project aims at characterizing the genotype/phenotype correlations in Duchenne Muscular Dystrophy. My second project aim at evaluating therapeutic compounds that induce exon-skipping or readthrough for DMD. My last project focuses on characterizing biopsies and developing new cell models for rare diseases.